>The cliche “one thing leads to another” is never truer than in a special collections, and today one thing led to a very valuable find.

One of our local Civil War enthusiasts who has written several books and is an authority on Rhode Island in the Civil War came to the department today to look through some of the materials in the Harris Collection. He asked if I had ever come across a flag which had apparently been given to the Library in 1910 or so, and I said no, but let’s take a look in the back. I have to admit that this collection of Civil War and slavery material has been in our possession for 125 years, and has not been given the best care, which I am attempting to rectify.
In a wooden crate, beneath a pile of books, we found–not the flag–but an assortment of papers which have apparently not been touched for nearly a century. I will be reporting on some of them later, but the most riveting item was in a small envelope, which bore the following words written in ink: 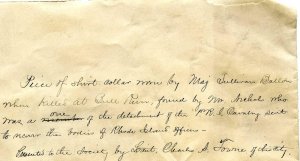 “Piece of shirt collar worn by Maj. Sullivan Ballou when killed at Bull Run, found by Mr. Nichols who was one of the detachment of the 1st R.I. Cavalry sent to recover the bodies of Rhode Island officers. Presented to the Society [RI Soldier’s and Sailor’s Society] by Lieut. Charles A. Towne of this city.”
Inside the envelope was a strip of cloth–the shirt collar in question–and my colleague began hyperventilating as he explained the significance of this bit of clothing.

Major Sullivan Ballou was a lawyer from Woonsocket who is known principally for the letter he wrote to his wife Sarah a week before he was mortally wounded at the First Battle of Bull Run, featured in the Ken Burns special on the Civil War. With both legs shattered, Major Ballou died on July 28, 1861. After his death, he was buried in a shallow grave near Sudley, Virginia, and several weeks later, soldiers of the 21st Georgia Regiment apparently dug up his body, thinking it was that of Colonel John Slocum, and desecrated it for reasons historians still debate. In a manner “unbecoming of savages,” the Georgians burned Ballou’s remains; one soldier reportedly carted the skull home to Georgia to use as a punch bowl. The charred bones of the major were buried nearby, while Ballou’s personal items were for some unknown reason hung in a nearby tree.
In March of 1862, a delegation of Rhode Islanders returned to Manassas and recovered the bodies of Rhode Island soldiers killed at Bull Run. The remains of Colonel Slocum and Captain Levi Tower were easily identified, but upon opening the grave of Major Ballou, all that was identified was a femur, pelvis, and several other scattered bones. In a tree nearby hung two of Ballou’s shirts, both identified by his name on the collar: one was white, the other striped calico. They were placed in a casket with the charred bones and returned to Providence, where the fallen major was given a hero’s funeral. After the war, the items used by Rhode Island’s dead became rather sacred souvenirs to the soldiers of Rhode Island; Colonel Slocum’s sword and belt were used to decorate a Grand Army of the Republic hall.
Sarah Ballou probably donated Sullivan’s shirt to the Rhode Island Soldiers and Sailors Historical Society, founded ca. 1875 to preserve and disseminate the history of the Civil War, by veterans and their sons. At the monthly meetings of the Society, papers were read by members, describing battles and campaigns, and they also developed a small library for the use of its members.
The striped red and white calico shirt, which Ballou had on when he was killed, was cut into pieces for the members. One piece, the collar band with the words still clearly visible, “Major Sullivan Ballou” was presented to Charles A. Towne, who placed it in an envelope and gave it to the Society.
The Providence Public Library was given the Society’s books and manuscripts in 1915, and in turn apparently gave the manuscripts to the Rhode Island Historical Society in 1933. This box obviously never made it across town, and now we have some treasures to preserve.
See:
http://www.historynet.com/sullivan-ballou-the-macabre-fate-of-a-american-civil-war-major.htm