PPL’s 2018 Creative Fellow, artist Becky Davis, has been poring over books, pamphlets, letters, and ephemera from our Fiske-Harris Civil War Collection, and looking through historic magazines and newspapers. 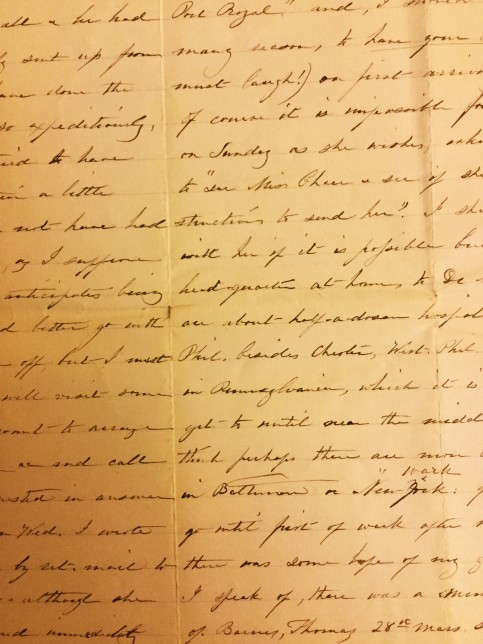 If you’re interested in seeing some highlights from Becky’s research and learning more about her process, you can read her blog! She also started an Instagram account featuring photographs of materials she finds here at the library, alongside related materials from other repositories.

First, a quick note: tomorrow (November 22nd), the library is closing early, so our Special Collections open hours will be abbreviated, running from 3:00-5:00 (instead of the usual Wednesday hours of 3:00-7:00).

Second: Have you been sitting at your computer thinking, “gosh, I wonder what people in Sheffield, Mass. were doing 153 years ago on Thanksgiving?” Well, are YOU ever in luck! Today we’re featuring a pamphlet with a discourse delivered in Sheffield on Thanksgiving Day during the American Civil War. (It’s not very exciting-looking, admittedly.) 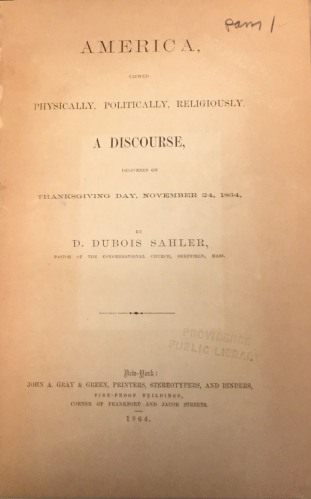 As you likely already know, Thanksgiving has been celebrated in the United States as a harvest celebration since a presidential proclamation in 1789, and became a federal holiday in 1863 when President Abraham Lincoln called for a nationwide day of “Thanksgiving and Praise to our beneficent Father who dwelleth in the Heavens.” (In the interest of historical accuracy regarding early Thanksgiving celebrations, we’d like to recommend the article from today’s New York Times entitled “Most Everything You Learned About Thanksgiving is Wrong.”)

Sahler’s discourse is like a hit parade of popular 19th century Christian topics. He praises the United States for its beauty and its fertile land, gifts from God to remind us of His Heavenly intent and to keep us secure from famine: 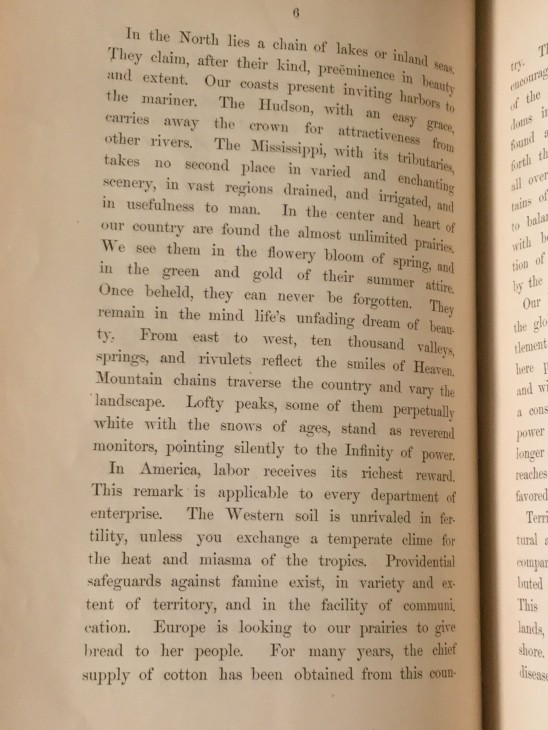 In the North lies a chain of lakes or inland seas. They claim, after their kind, preeminence in beauty and extent. Our coasts present inviting harbors to the mariner. The Hudson, with an easy grace, carries away the crown for attractiveness from other rivers… In the center and heart of our country are found the almost unlimited prairies. We see them in the flowery bloom of spring, and in the green and gold of their summer attire. Once beheld, they can never be forgotten… From east to west, ten thousand valleys, springs, and rivulets reflect the smiles of Heaven. Mountain chains traverse the country and vary the landscape…

The hit parade continues with a good dose of xenophobia, as Sahler praises the Pacific Ocean for keeping the United States at a great distance from Asia and its purported atheists: 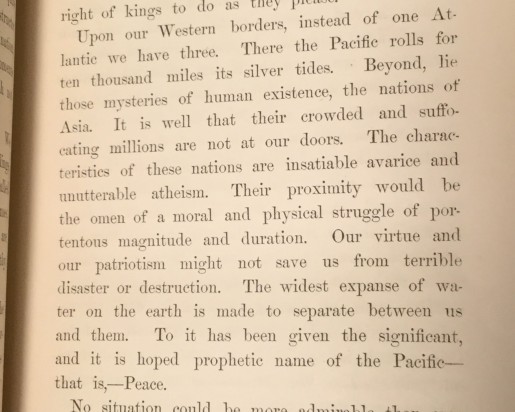 Upon our Western borders… the Pacific rolls for ten thousand miles its silver tides. Beyond, lie those mysteries of human existence, the nations of Asia. It is well that their crowded and suffocating millions are not at our doors. The characteristics of these nations are insatiable avarice and ututterable atheism. Their proximity would be the omen of a moral and physical struggle of portentous magnitude and duration. Our virtue and our patriotism might not save us from terrible disaster or destruction. The widest expanse of water on the earth is made to separate between us and them.

Phew. He then discusses slavery as a familiar yet immoral institution, and describes the Civil War as a moment for “a nation’s ruin or regeneration.” Sahler’s language here is especially interesting in light of current media focus on political polarization in America: 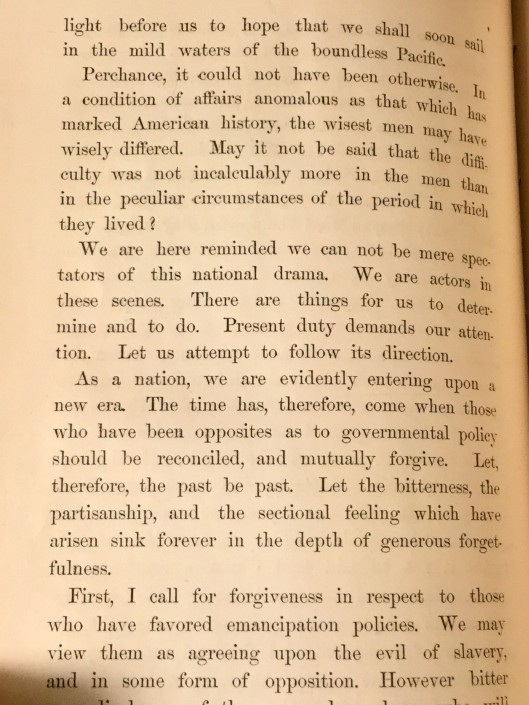 We are here reminded we can not be mere spectators of this national drama. We are actors in these scenes. There are things for us to determine and to do. Present duty demands our attention. Let us attempt to follow its direction.

As a nation, we are evidently entering upon a new era. The time has, therefore, come when those who have been opposites as to governmental policy should be reconciled, and mutually forgive. Let, therefore, the past be past. Let the bitterness, the partisanship, and the sectional feeling which have arisen sink forever in the depth of generous forgetfulness.

Unfortunately, the tensions from the Civil War have not exactly sunk “forever in the depth of generous forgetfulness,” even 153 years after Saleh delivered his discourse. I’m also fairly confident that many of us will be discussing these same issues at our Thanksgiving tables later this week.

If you’d like to read more of this pamphlet, or any of our many other pro- and anti-slavery Civil War pamphlets, please visit during our open hours or make an appointment! 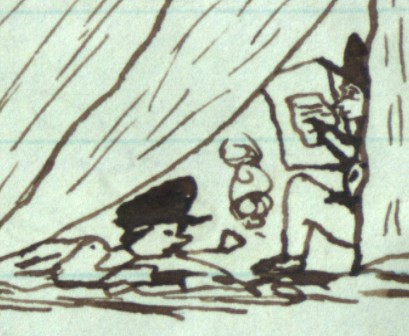 The image above is a sketch from a letter written by George Turner, a Rhode Island Civil War soldier whose correspondence has recently been scanned and transcribed by URI student Michaela Keating. The online collection (available here) includes nearly 200 letters, mostly sent by Turner to his parents at home in Rhode Island, dating from 1861 to 1864. Taken together they offer an evolving portrait of one soldier’s daily life over the years of the war and his developing attitudes toward race, the South and the purpose of the war.

Turner wrote the letter from which the image above was taken in December of 1861, not long after the Union capture of Fort Wells in Hilton Head, South Carolina, where Turner spent the majority of his time during the war. In the letter, Turner describes his entry into the fort and the circumstances of his drawing:

Soon after entering the Fort we were allowed to stroll around and look about. And during my stroll I cam across a gun carriage that was completely smashed up and while I was looking at it I picked up picked up part of a man’s ear and some teeth and while looking at it come to conclusion that this man had changed his southern views and gone to another land. And now that I think of it of will give you another drawing [sketch of two figures in a tent with “Traveller’s Rest” written on the side of the tent] The picture which I bring before your view this time represents your humble servant writing a letter to his Rhode Island friends while one of his mess mates lays on the ground smoking. The name which you see marked on the tent is marked with a led pencil. But I pity the poor fellow who comes there for rest if he does not belong there. Now I have lived in just such a house as you see just four months on the 20th this month, and during that that time I have not taken off my pants olny when I change my under clothes or to wash all over. And I am just as tuff as a birch I am fat rugged and saucy. I can swallow a roast turkey at one gullup. Yesterday we had the first white bread we have had since the 23 day of Oct and when we got our loaf we went about looking at it like so many boys with a new year’s present. But after a while we came to the conclusion to eat it and the way it went down my illustrious gullet was a caution to lookers on.

The letter is typical in its attention to the daily details of camp life. Also typical is the discussion that takes place just prior to this excerpt in which Turner displays antagonism toward the “contraband” freed slaves present at the fort. It’s a theme that develops throughout the course of Turner’s letters, as he grows to despise the former slaves he feels are being better treated than the soldiers.

For more information about the George Turner correspondence, visit our online exhibition, which provides background information about Turner and some of the major themes of his letters. And visit the digital collection to read the letters yourself. As of now over 100 letters have been transcribed, with more to come. And if you’d like to take part and try transcribing some of the letters yourself, just click the “Transcribe this item” link at the bottom of an item and then click the “edit” button.

(If you’re interested in Turner you might also want to check out the Summer/Fall 2012 issue of Rhode Island History (vol. 70.2), which features an article by Kirsten Hammerstrom on Turner titled “Souvenirs of War” (pp. 74-86). 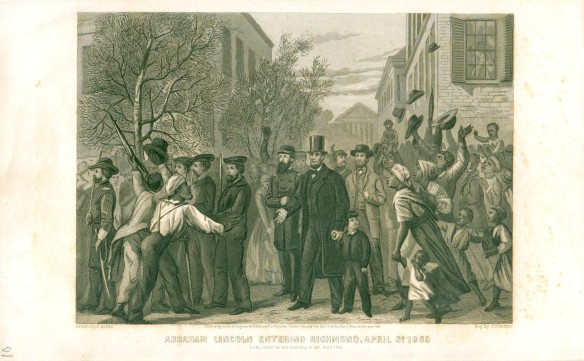 In April of 1865 you couldn’t see him in the movie theater, but you could see him on the streets of Richmond, victoriously entering the city. There are multiple accounts of Lincoln’s actions that day, and you can try to determine from the famous depiction here whether he was “joyous as a boy or plumb tuckered out“. 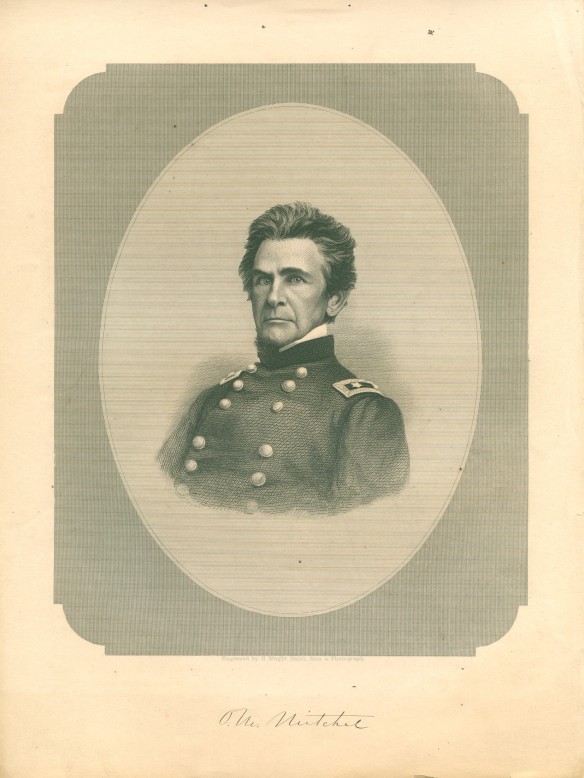 Ormsby Mitchell with a neck beard yearning to be free of his collar: 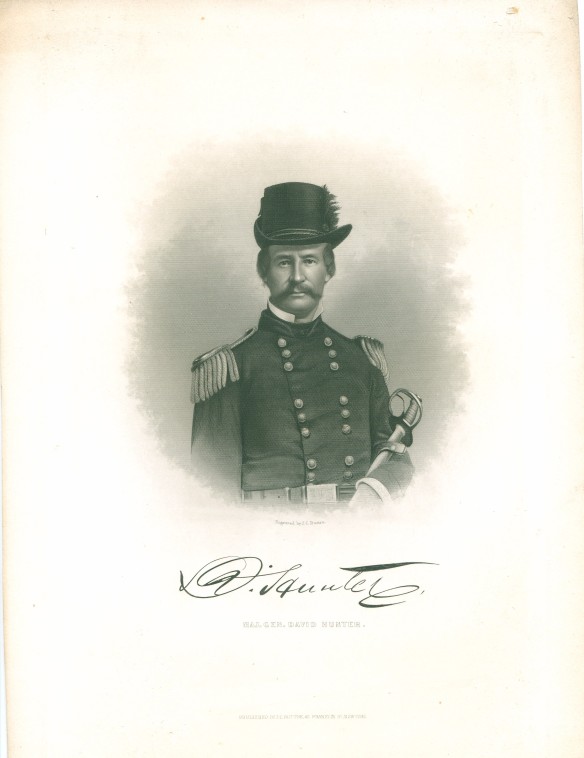 Jefferson Davis essentially put out a hit on Hunter for his efforts to arm freed slaves and include them in the war effort.

(The following post is contributed by Ramon Cartwright, a RISD graduate and one of our fantastic volunteers. Ramon recently finished processing a collection of over 800 important and wide-ranging manuscript items. Items from the collection have been mentioned on this blog before (here, here, here and here, for instance) but this is the first time the collection has been fully listed online. Upcoming posts will highlight other items from the collection and conservation efforts to preserve it.)

The processing of the Daniel Berkeley Updike Autograph Collection has been completed. Although there is evidence that the collection was initially comprised of New England names, the collection has now grown to reflect a more diverse grouping. A selection of the material, much of which had been culled from the correspondence and papers of Wilkins Updike, includes the names of men involved in politics. Eleven presidential signatures are included in the collection. Also included within the miscellany is a letter from Edgar Rice Burroughs, a poetic excerpt from Sarah Helen Whitman, and a series of fervid letters from a Union soldier to his parents.

During the processing of the Daniel Berkeley Updike Autograph Collection I encountered a 12 page manuscript by Agnes Repplier (1855-1950), titled “What Pessimism Is.” Repplier was a Philadelphia born essayist, biographer and occasional poet published regularly within the pages of The Atlantic Monthly. Her numerous essays were also published in Life, Harper’s, Monthly Magazine, The New Republic, McClure’s, and The Yale Review. “What Pessimism Is” expands upon and clarifies Repplier’s criticism of the poetry of Robert Browning. In an earlier analysis, also published in The Atlantic Monthly, Repplier had classified Browning’s poetry as “of the pessimistic order.” A controversy ensued. Browning enthusiasts found fault with the criticism and surmised that Repplier had failed to grasp Browning’s meaning. “What Pessimism Is,” offers her defense of the initial appraisal using examples of the poet’s works. The essay was published in The Atlantic Monthly Vol. LXII, 1888. Below the reader will find the first four pages of the manuscript. The pages illuminate the background to the article’s origin. Her wit and erudition, for which she had been known, are evinced in these first few pages. 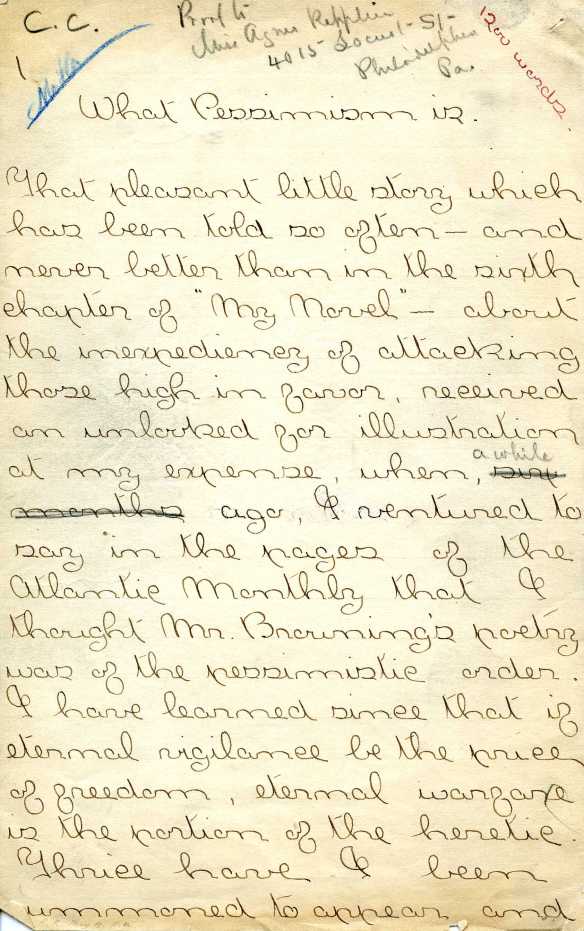 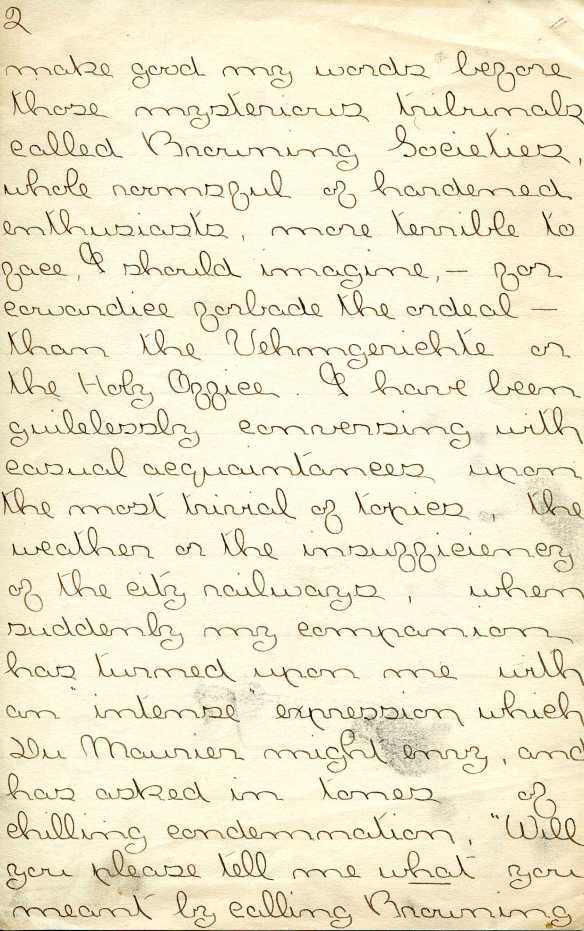 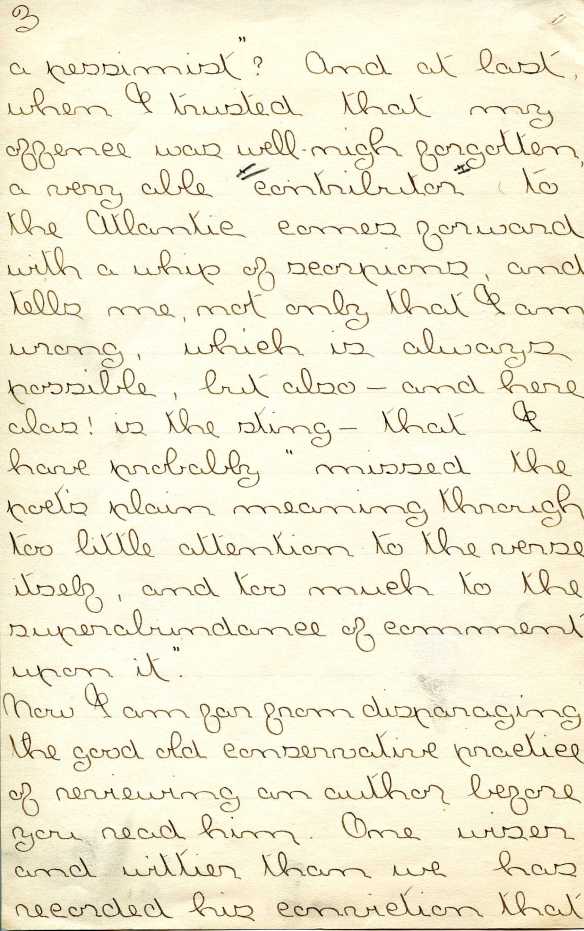 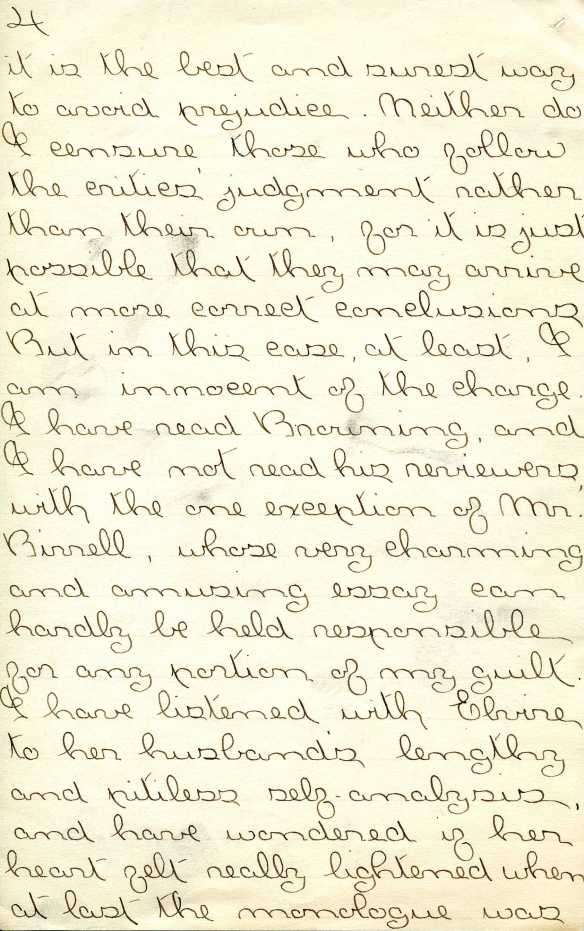 Also included in the Updike Autograph Collection is a leaf from Henry David Thoreau’s essay “October, or Autumnal Tints.”  Originally published in the October 1862 Atlantic Monthly, the essay offers Thoreau’s extended meditation on the changing color of New England autumnal foliage. Among the tints that Thoreau focuses upon, the reader will find poetic descriptions of Sarsaparilla, Pokeweed, Red Maple, the Elm, Scarlet Oak, and more. The brief explication on each tint is presented in the order in which the brightest colors are displayed. The manuscript focuses on ripeness, as it is evinced in the brighter hue flowers assume prior to falling. The extract includes passages that were later revised prior to publication.  The leaf is float mounted on an 8 3/4 x 10 1/4 sheet of paper. 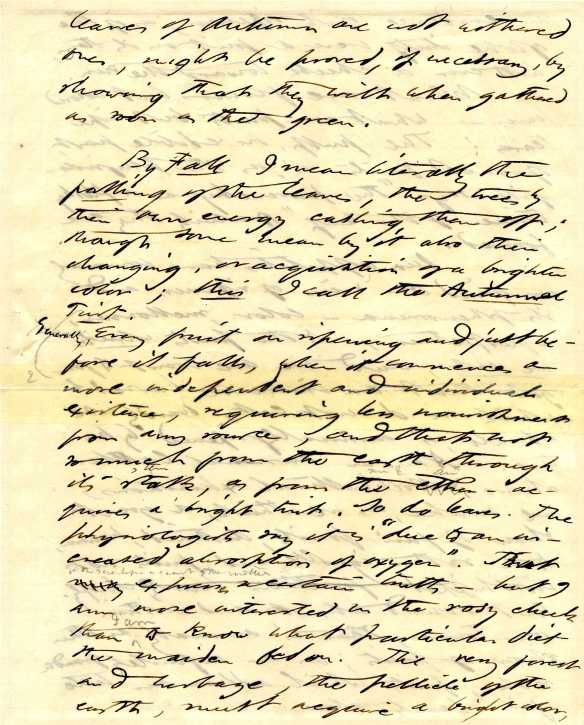 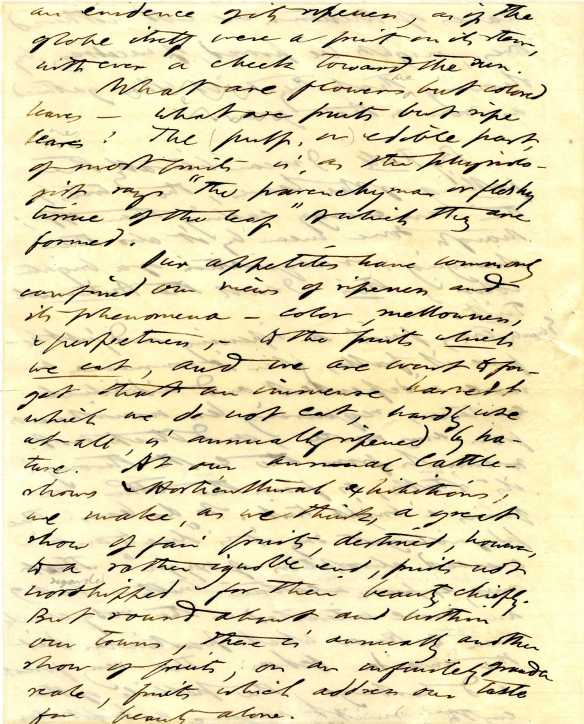