Today’s magician is not technically a magician, but rather an Italian spiritualist and medium named Eusapia Palladino. 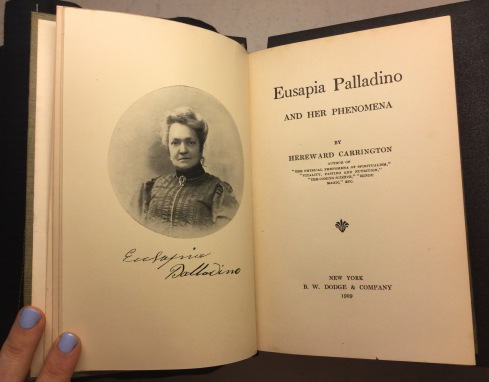 Palladino’s “phenomena” referenced in Carrington’s book, above, included levitating tables and stools, bells ringing in the air, mysterious hands touching observers, sounds of ghostly tapping on furniture, and the like.

An orphan and former wife of a traveling conjurer, she was brought to public attention in 1888 by a Professor Chiaia of Naples who wrote a letter to a Professor Lombroso claiming that he had investigated Palladino’s phenomena extensively, was convinced of their legitimacy, and requested Lombroso to investigate them in turn. This led to more than a decade of investigatory seances in which various researchers (including a number from the Society for Psychical Research, and even, at one point, Pierre and Marie Curie) tried to prove or disprove Palladino’s methods. She attracted huge numbers of both skeptics and supporters. 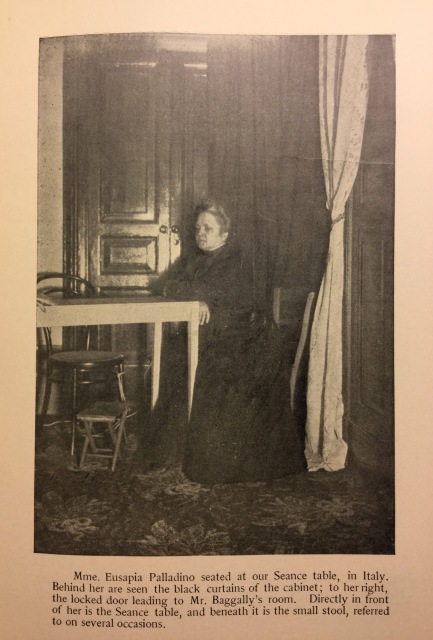 Wikipedia has an extensive entry on Eusapia Palladino, which I won’t summarize here, although I do highly recommend it. Instead, I offer this tidbit from Eusapia Palladino and her Phenomena, in which the author describes an incident Palladino’s early life, based on her own recollection:

The villagers took little care of the orphan. Once when she was only a year old, she was allowed to fall, so that a hole was made in her head. That is the famous cranial opening from which, in moments of trance, a cold breeze is felt to issue. On this scar has grown a tress of hair that has always been white since infancy, and which is easily distinguishable in her photographs.

I will also leave you with a quote from psychical researcher Eric Dingwall (nicknamed “Dirty Ding”, according to Wikipedia), who was not convinced of Palladino’s powers, nor awed by her apparent cranial wind tunnel, but rather thought that she was “vital, vulgar, amorous and a cheat.” 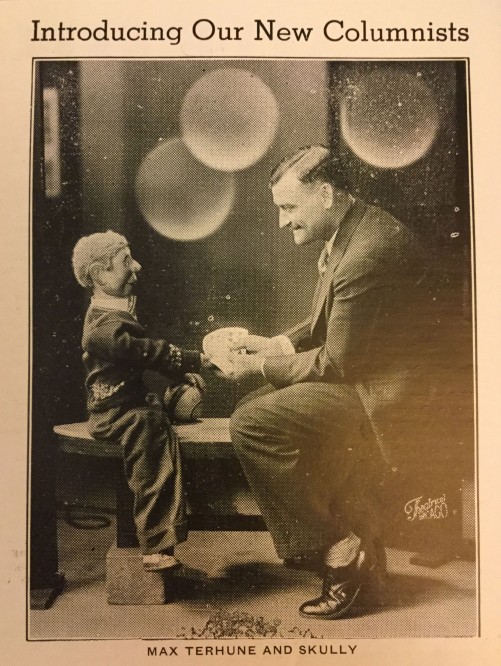 This week’s featured magician isn’t technically a magician, but rather a magician’s most classic, well-loved, time-honored sidekick: the rabbit. 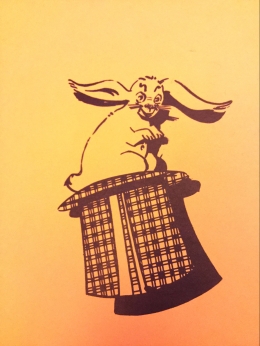 There’s a bit of debate about the first magician to pull a rabbit from a hat–some say it was Louis Comte, in 1814, while others claim it was John Henry Anderson, “The Great Wizard of the North”. Either way, rabbits in hats have become synonymous with stage magic, as evidenced by the expressively-eyebrowed fellow above.

Today’s featured rabbits span decades, but all are taken from various covers of Ireland’s Magic Company Yearbook. We made a rabbit-y collage to showcase some of these soft sidekicks! 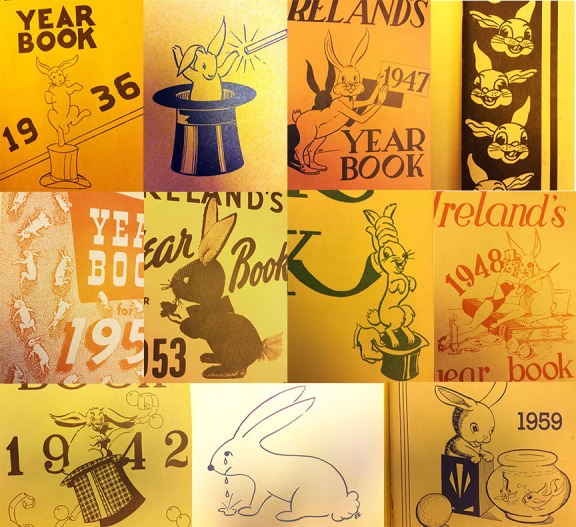 You can find issues of Ireland’s Magic Company Yearbook, along with innumerable other rabbit illustrations, in our John H. Percival Collection on Magic.

This week we’re happy to feature the first Spanish-speaking magician that we’ve found among the pages of our Percival Collection: O’Justinaini, who performed in the American southwest in the early 1920s. 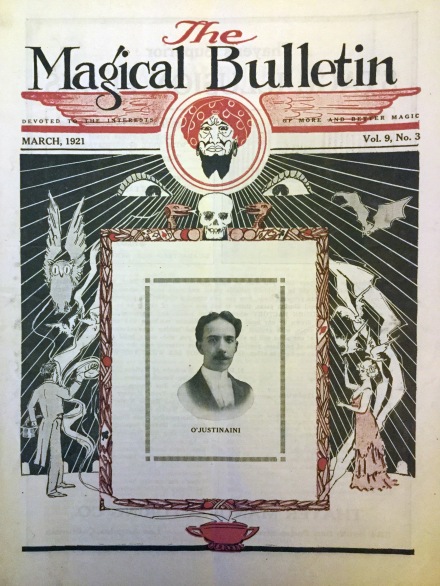 This sensational illustrated border graces the cover of numerous 1920-1921 issues of The Magical Bulletin, complete with stretching owl, spooky eyes, snakes whispering into a skull’s external acoustic meatus, and doves in a column of art deco smoke.

As for the improbably-named O’Justinaini, his performances were in great demand in Arizona, New Mexico, and southern California. The Magical Bulletin continues: “a polished gentleman, and a gifted performer, his show consists of high class magic, illusions, and the ever popular crystal gazing and mind reading mysteries, in the performance of which he is ably assisted by his brother, who is also a most talented artist.”

Today’s featured magician is a true classic, both entertaining and mystifying. He wears a heavy cape and a hat, never appearing in public without them; he appears without warning, generally in the dark of night; he defies gravity and other earthly limitations; he charms large animals, who heed his command; and in the manner of enigmatic magicians and stylish wizards everywhere, he wears his beard long. 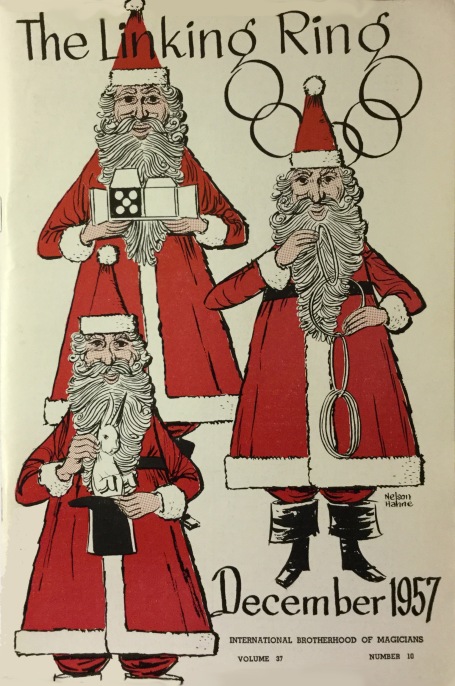 Ah, yes! Ho, ho, ho. I especially like the trick above where he seems to have made five tiny macarons appear inside a gift box. Thanks, magic Santa!

We’ve begun to notice a mephitis mephitis trend in mid-century stage magic. Perhaps you recall Sgt. Phil Jay and his trained skunk, or the skunk in John Levy’s magical menagerie. Here’s another spellbinding skunk, this one being pulled from a red velvet change bag by magician Robert (Bob) Hardie: 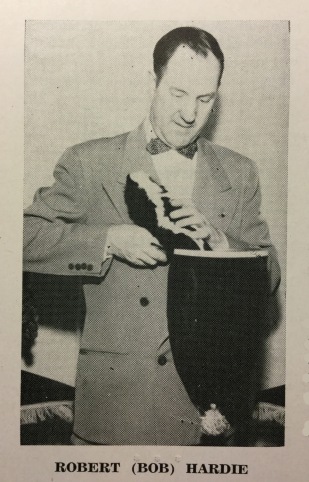 The effect is that the magician or emcee comes forward with a huge red velvet change-bag — shows it empty and proceeds to extract a large number of silks, etc. from it, while at the same time reciting a poem, and finally ending with the production of a skunk.

Image and description are from the September 1956 issue of The Linking Ring.

For those of you who can’t make it over in person, we also have a virtual featured magician from our Percival Collection: Brian Mainwaring, “The Gentleman From London.” 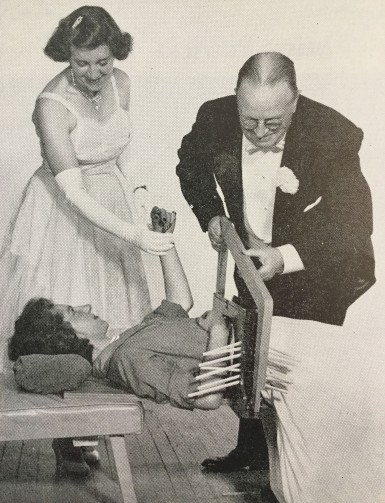 Here’s Mainwaring gleefully sawing a woman in half while his lovely assistant takes said woman’s pulse. (Isn’t it always reassuring to get medical support from someone in opera-length gloves? They just look so… chic yet authoritative.) The image above is from the souvenir program of the Twentieth Annual New England Convention of Magicians, held in 1958 in New Haven, Connecticut.

Mainwaring was born outside of London, attended Naval Military School, and spent time living in India. After marrying Christine Sanders, he settled in Bridgeport, Connecticut. He doesn’t seem to have left much of a paper trail, although I did find him listed as entertainment in a fantastic newspaper article with the headline “5 Santas to Greet Trumbull Kids”. Five santas! How extravagant!

This week’s magician, mentalist Carina (assisted by George Allston), is hailed as “bewildering!”, “amazing!”, “intriguing!”, and “new and different!”.

Here she is, blasting forth from somewhere in the midwestern U.S., all without losing her composure or the thing tossed artfully over her shoulder: 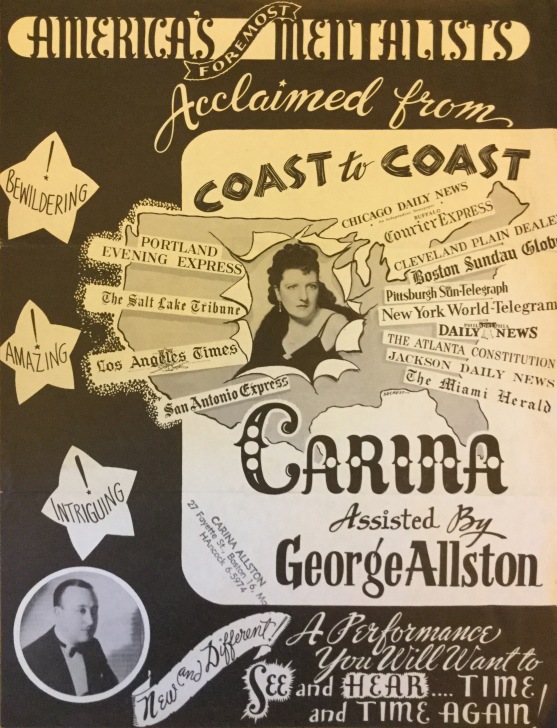 I really like that the newspaper nameplates/ mastheads are arranged roughly geographically.

This promotional flyer, from our John H. Percival Collection, indicates that the Allstons hailed from Boston, although I can’t find any further information about them online. Do you know more about Carina and her assistant? Let us know!

It’s been far too long since we’ve featured a magician from  our Percival Collection! This week’s magician, Viggo Jahn, was originally a window decorator hailing from Copenhagen. 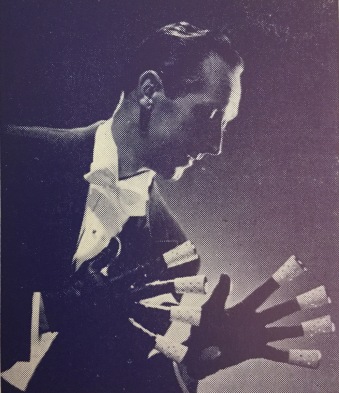 Here’s Viggo Jahn doing something totally inscrutable. Are those thimbles?

According to the November 1953 issue of M-U-M: Magic, Unity, Might, Jahn took up stage magic during the occupation of Denmark in WWII; the “entertainment-starved Danes” were eager for new performers, and a theatrical agent recognized Jahn as “very good looking, intelligent and young, and engaged in a business that required a touch of showmanship”.

After preparing for just three months, Jahn began presenting his manipulations in public, and he quickly improved “by leaps and bounds”. After the occupation was lifted, he began performing in Sweden, then across Europe, and later all over the world. “Wherever the wealthy and the celebrated dined in lovely surroundings, there was Viggo,” says M-U-M.

The article also notes that “he was still a darned good window trimmer”.

The cover of the August 1960 issue of Genii: The Conjurors’ Magazine features Ron Urban and two assistants partaking in some truly magical mischief. 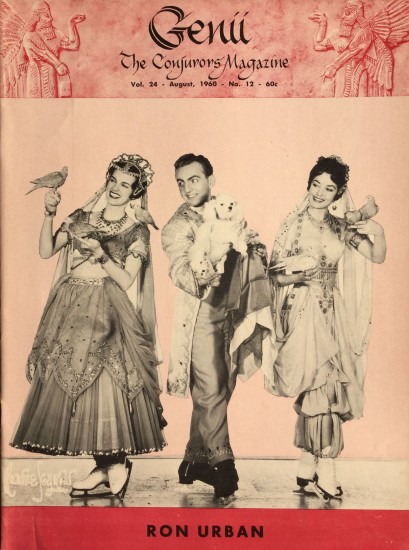 At first glance, this is a fairly typical 1960’s stage magician’s scene: sequins, demure female assistants, a hodgepodge menagerie. Looking more closely, however, one begins to ask questions: are those… pigeons? Why are they different colors? How is that toy poodle so serene? Is one of those assistants wearing fishnets beneath her bloomers? Are all three of them on… ice skates?

Seeking answers, I turned to the magazine’s feature article. Since you’re undoubtedly asking questions that are 100% identical to mine, I’ll share my discoveries: those are not pigeons, they’re doves. They’re different colors because Ron Urban dyes his doves, in what the article calls a “living magical rainbow of pastel doves, very appealing to the eye.”  I know nothing about the tranquil canine. As for the costumes, as well as the ice skates, this photo is from Urban’s six month engagement at Chicago’s Conrad Hilton Hotel performing in an ice show called “Persian Parad-ice.” 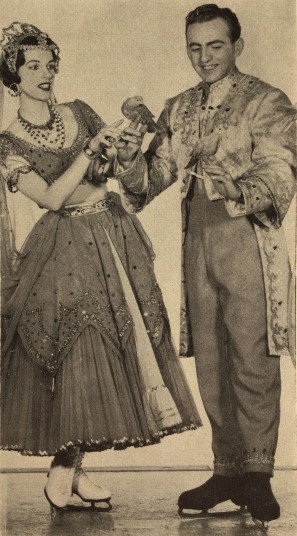 On that note, let’s appreciate this fantastic head shot of the magician, complete with white bow tie, fetching finger waves, and mysterious boutonniere. 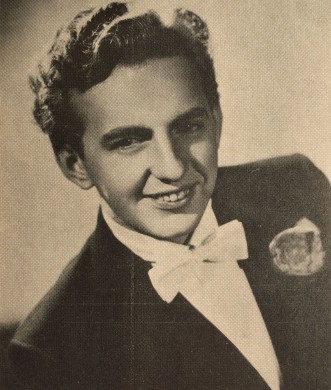 If you’re not yet smitten, listen to this: he also plays the saxophone.