Another glorious find–an 18thC children’s pop-up book in pristine condition, with its original wrappers. The following description of this genre comes from a very nice exhibition at UCLA: http://www.library.ucla.edu/special/childhood/pictur.htm#anchor1707872 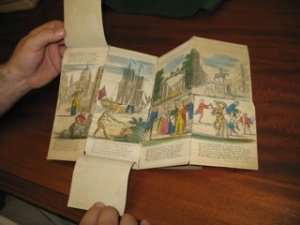 “Movable parts appeared in scientific books as early as the sixteenth century, but not until the mid-eighteenth century were movable books conceived as entertainment for children or adults. The toy trade also became increasingly important as the children’s market grew. The harlequinade, a type of novelty book named after theatrical pantomimes featuring the harlequin in a leading role, was invented around 1765 by London bookseller Robert Sayer. Composed of a single sheet of paper with illustrations on flaps that open to reveal another picture below, the harlequinade immediately became immensely popular.”

This item is part of the collection given by Edith Wetmore in the 1950s.