It’s been more than a week, but we’re still basking in the hilarity and creativity of our 2016 Creative Fellow Walker Mettling’s library story night, “A History of Future Bummers“.

Jeremy Ferris performs a clam-centric ritual in front of his projected illustration. The drawing is based on historical photos of clambakes in the Rhode Island Collection.

During the month of May, Walker asked a number of local artists, writers, and musicians to visit Special Collections, each armed with a research assignment. They then were asked to write a story or create a comic based on their research. 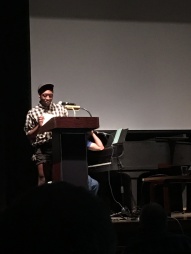 These artists’ various creations were showcased at the resulting “A History of Future Bummers.” Writers including Caitlin Cali, Veronica Santos, Dailen Williams, Alexander Smith, Jim Frain, Jeremy Ferris, Keegan Bonds-Harmon, William Keller, and Julia Gualtieri shared their stories, punctuated by musical interludes from Joe DeGeorge. (You can listen to Joe’s sketch demos of these library-based songs here, here, and here. The last one is based on entries about vandalism in our Rhode Island index card catalog!) 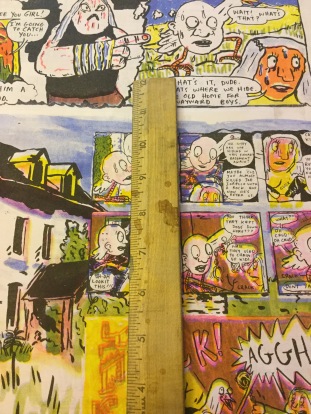 Walker printed the paper in color on a risograph, and a small army of intrepid volunteers taped and folded pages. Thanks to all for their hard work and for a hilarious and highly entertaining evening!

(Stay tuned for more info about seeing drafts and originals of these awesome creations live and in person!)