We have an update to our last post! We’re still accepting proposals for our 2021 Creative Fellowship…

But we’ve decided to postpone both the Fellowship and our annual Exhibition & Program Series by six months due to the coronavirus. The annual exhibition will now open on October 1, 2021 (which is 13 months away, but we’re still hard at work planning!).

The new due date for Fellowship proposals is April 1, 2021. We’ve adjusted the timeline and due dates in the call for proposals accordingly.

Here in PPL’s Special Collections, we have the immense pleasure of working frequently with amazing artists and designers who use our collections for information, inspiration, and source materials. They challenge us with unusual research questions and dig into our materials in delightful, non-linear ways.

Which leads to our exciting announcement: we’ve created an online gallery featuring artworks inspired by materials from our collections! Click through to see artworks, source materials, artist bios, and links to artists’ websites. (Special thanks to our Digital Content Coordinator, John Bent, for all of his hard work on this.)

We’ll be adding to the gallery in the coming months. Have you made something based on Special Collections research that you’d like to see included? Drop us a line.

In honor of the just-past May Day holiday, we’ve pulled items representing work and workers for this week’s open research hours. Swing by before 1:00 today (or make an appointment any time) to see these in person! 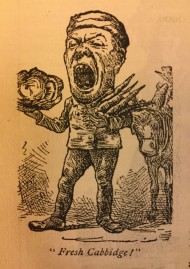 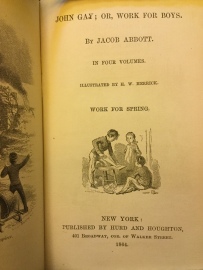 Above, from L-R: image from Old London Street Cries and the Cries of To-Day (London: Field & Tuer, 1885); title page from John Gay; Or, Work for Boys (New York: Hurd and Houghton, 1864); image from an untitled Italian book of men and women dressed for different occupations (let us know if you know more about this one!).

Here’s the table of contents from Charles Quill’s The American Mechanic, published in 1838.

Fun fact regarding this book: the Providence Public Library was founded in 1871 when members from The Franklin Society, The Rhode Island Society for the Encouragement of Domestic Industry, The Franklin Lyceum, and the Association of Mechanics and Manufacturers joined together to form a free public library (and art gallery and natural history museum). When the library first opened its doors in 1878, its collection contained a great number of books from the Mechanics’ Library. Many of those books are still here today, housed in Special Collections, and identifiable by the Mechanics’ Library stamp on the title page. Here’s the (rather faded) evidence that The American Mechanic was part of PPL’s original collection:

For those with a deeper interest in Rhode Island labor history, I recommend checking out some of the labor-related images in our digital collections. I also highly recommend the gorgeous and heartbreaking collection of digitized photographs from the National Child Labor Committee Collection at the Library of Congress. You can search within that collection for photographs taken in Rhode Island, of which there are more than 100. (These investigative photographs were taken by Lewis Hine between 1908 and 1924, while working for the nationwide National Child Labor Committee. They’re an incredible glimpse into the lives of factory and textile workers, as well as immigrants and working class families, in the early 20th century.)

Just a reminder: Special Collections has open hours every Tuesday from 10:00 – 1:00, and every Wednesday from 3:00 – 7:00. You can stop by to browse a selection of items set up in the Reading Room, or you can request items related to a topic of interest. (Have you been wanting to look at children’s books illustrated with woodcuts, or diagrams of early 20th century plumbing systems? This is a great opportunity!)

We’re located on the 3rd floor of the Providence Public Library, at the top of the marble staircase. We’re also open by appointment; just give us a call or send us an email! 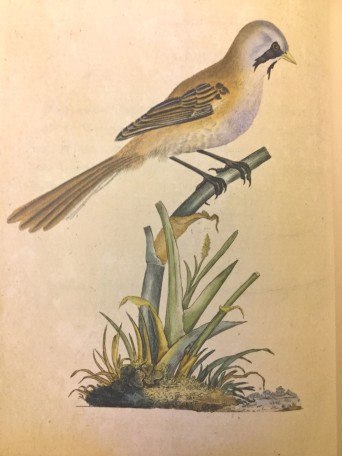 This lovely, bespectacled fellow hails from E. Donovan’s 1794 The Natural History of British Birds; Or, a Selection of the Most Rare, Beautiful, and Interesting Birds Which Inhabit This Country: The Descriptions from the Systema Naturae of Linnaeus; With General Observations, Either Original, or Collected From the Latest and Most Esteemed English Ornithologists; and Embellished with Figures, Drawn, Engraved, and Coloured from the Original Specimens. (Say that five times fast!) 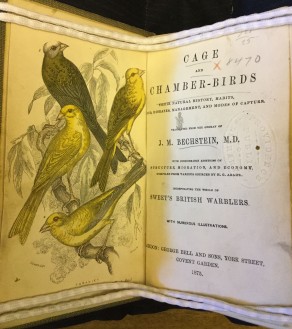 Today’s visitors also can page through this book on “cage and chamber-birds”. It includes information on “their natural history, habits, food, diseases, management, and modes of capture”. (A researcher yesterday deemed this book “kind of awesome and kind of a bummer,” which I find to be entirely accurate.) 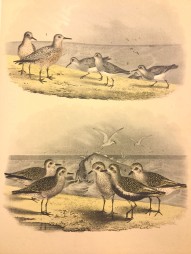 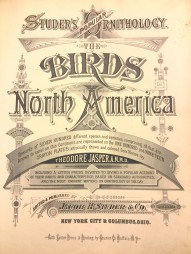 Studer’s Popular Ornithology, published in 1881, has beautiful, large-scale, color illustrations of birds, as well as a spectacular title page. (Does the “A” in the word “America” look vaguely masonic to anyone else?)

Stop by to spend some time with these books today, or contact us to make an appointment with these feathered friends.

We’ve recently pulled a selection of calendars and almanacs as source material for a top-secret* creative collaboration.

*It’s not actually that secret, but “as-yet unpublicized” doesn’t sound quite as thrilling.

Tomorrow (Tuesday) from 10-1, during our weekly Art//Archives visual research open hours, we’ll have these books on display for your reference and enjoyment.

The most visually stimulating of the bunch is undoubtedly the 1866 The Life of Man, Symbolised by the Months of the Year in a Series of Illustrations by John Leighton, F.S.A. and Pourtrayed in Their Seasons and Phases, with Passages Selected from Ancient and Modern Authors by Richard Pigot.

The oversized book has an illustration for each month of the year: 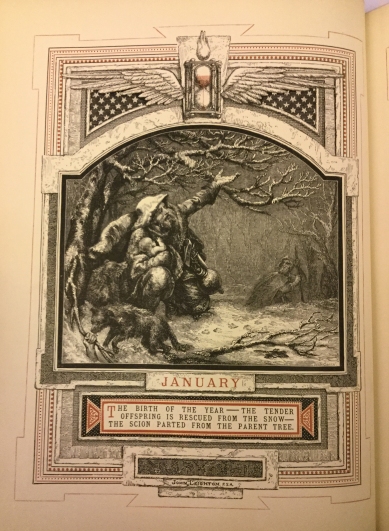 I’m a real sucker for the wings of time-themed frame. Also, look at that emaciated wolf-like animal and the “tender offspring” who is completely lacking seasonally-appropriate attire, presumably as he was just “rescued from the snow”.

Each month’s facing page shows the corresponding age of man:

These are followed by a selection of seasonally-appropriate quotes and poems set in a variety of type faces: 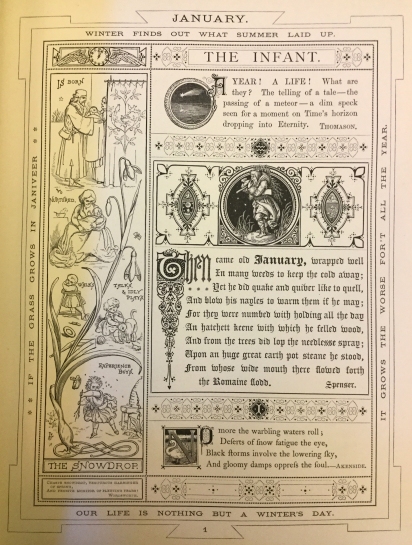 The January chapter ends with this impressive seasonal crest of sorts:

Stop by tomorrow if you’d like to see what typographic and artistic delights the other 11 months hold!

Our Wednesday afternoon open hours today will end earlier than usual: we’ll be open from 3:00 – 4:15. We return to normal open hours next week.

If you have last-minute, end-of-2015 research, please stop by this afternoon, or visit us in following weeks on Tuesdays between 10:00 – 1:00 or Wednesdays between 3:00 – 7:00. Of course, you can always make an appointment by emailing us at special_collections@provlib.org.

(For the academics among you: did your semester just wrap up? Now’s the perfect time to pursue your personal, esoteric passions! We have tiny books on the rules of whist, folios of traditional Persian architecture, and historic sample books from local textile mills. We’d love to rustle up some esoterica for you.)

In anticipation of the upcoming Thanksgiving holiday (or, as Abraham Lincoln declared it in 1863, a national day of “Thanksgiving and Praise to our beneficent Father who dwelleth in the Heavens”), we pulled two November issues of American Cookery Magazine, one from 1914 and one from 1944.

The 1914 edition has several sample menus for Thanksgiving dinners, including the familiar–“individual pumpkin pies”–and the historically mysterious–“Kornlet, Mexican style, in ramekins”. (For the record, I learned today that Kornlet was a canned green corn pulp that was widely available at the time.)

If you decide to skip the “hot ham mousse” and instead opt for the “roasted chicken, sausage cakes”, you can follow this seasonally-appropriate recipe from the same issue:

I’m not 100% sure which part is the sausage and which parts are the fritters, but I am sure that those chickens seem to be awkwardly swan-diving into the surface of their elegant tray.

Fast-forwarding 30 years to the 1944 issue, we have a recipe for these holiday favorites, porcupine puddings, suggested as an accompaniment to a Thanksgiving “porkchop with peanut stuffing”:

The 1944 advertisements may prove helpful for the Thanksgiving cook, as well. For instance, they guide you toward a possible solution for your Pie Problems:

And finally, apropos of nothing besides that it’s in the same magazine, look at this delicious recipe for pea soup with floating frankfurter slices:

Don’t miss the caption: “Split pea soup warms the cockles of your heart.” 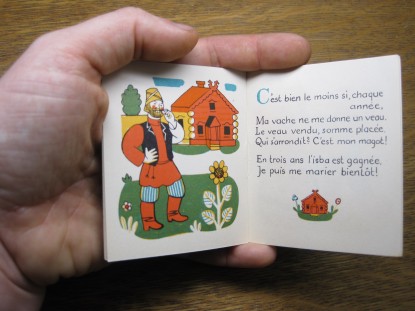 Don’t worry, we have a magnifying glass. Stop by between 10 and 1 to see some of these little wonders!

Did you know that September is National Guide Dog Month? Neither did we! 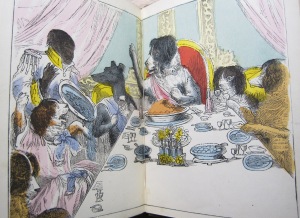 Stop by Special Collections between 10:30 and 1:00 for a look at these sweet pooches.