We’re excited to announce that our 2019 spring exhibition is out in the world as of today. And this time we really mean out in the world. Due to our ongoing renovation we don’t have an actual exhibition gallery, so this year’s curator, Angela DiVeglia, moved the exhibition outdoors.

Exhibition curator, Angela DiVeglia, with one of the signs. 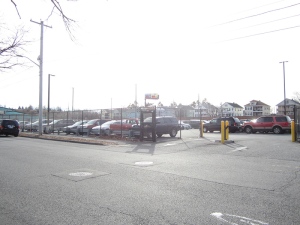 Starting today, you’ll see signs like this one out in the wild, highlighting the fact that what looks like an empty piece of the city actually might have a colorful history. For instance, this looks a pretty nondescript parking lot, right? But it wasn’t a parking lot in 1914; instead it was Melrose Park, home to baseball’s Providence Grays and their young up-and-coming pitcher, Babe Ruth. You can read all about it via the Rhode Tour app or website, where you’ll find historic images of each site.

You can learn more about the exhibition and program series on our website, where you can find a map of all the sites and links to the Rhode Tour website. Or stop by the library later this week to pick up a printed map.

As a bonus, here’s a gallery of installation photos… 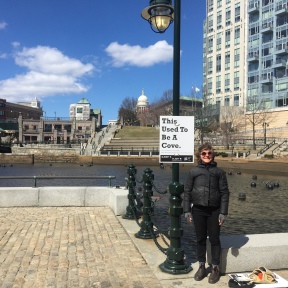 This exhibition is part of the Year of the City programming.

We’re just over a week away from this year’s Updike Prize award ceremony, and we’re excited to welcome our featured speaker, Nina Stössinger, to Providence. If you want to get a head start and read a short article by Nina, try this one. Or maybe check out this interview with her and then follow her on Twitter.

But whatever you do, be sure to join us on Monday, October 23rd, at the RISD Metcalf Auditorium and hear from Nina in person!

As a follow-up to our recent post about our ALA statement broadside, we’re sharing a few photos taken at DWRI while they were working on the project. And if you like those, you’ll really like following them on Instagram. 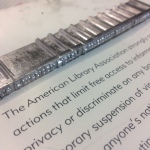 The finished broadside and the forme used to print it.

Moments of political turmoil are an opportunity for organizations to define what they really believe, and in January the American Library Association did just that with a statement titled, “ALA opposes new administration policies that contradict core values.”

We liked the statement so much we thought it deserved a chance to move off the screen and onto the page, so we teamed up with local letterpress printers DWRI Letterpress to create a broadside version of an excerpt of the statement. The text was set on one of the DWRI Linotype machines and printed by hand.

We’re going to post copies here at PPL, but we printed more than we’ll need, and we’re happy to share. If you’re interested in having a copy for your library, just contact us. We might even throw in a copy of our awesome new comic.

The finished broadside and the forme used to print it.

(This is a guest post by Mark Kelley, a researcher from the University of California, San Diego, who has been working with our Nicholson Whaling Collection in the past weeks. Follow him on Twitter @MarkBKelley. Thanks, Mark!)

“My stamps are poor and they look more like straddlebugs than porpoises.”

So notes Henry DeForrest, second mate during an 1852-1853 voyage from Massachusetts to the Atlantic and Pacific whaling grounds. During this fourteen-month journey aboard the William Rotch, DeForrest faithfully recounts his home on the water in daily journal entries. “It is written from the impulse of the moment,” he affirms eight months into his voyage, “just as I feel at the time of writing, so goes down.” Like many whalers and sailors, DeForrest augments this power of description with stamped pictures of the creatures whose lives (and deaths) ordered his daily life. Sailors created these stamps by cutting bone, ivory, or wood into the shape of whales or other marine animals. These stamps aided bookkeeping and also added interest to logbooks or journals that recount thousands of whaling and merchant voyages throughout the eighteenth and nineteenth centuries. Much like scrimshaw (the carved and colored whalebone, ivory or shells that may also be found in the library’s collection) stamps are the product of maritime artistry as well as a deep engagement with marine materials. 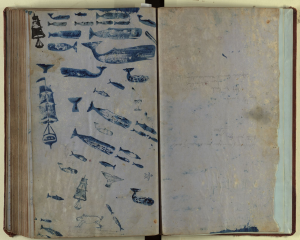 Though DeForrest laments the quality of his porpoise stamps by comparing them to long-legged insects, he apparently had access to more materials than most. His journal’s back page reveals a wealth of figures that included sperm whales, dolphins, porpoises, and even ships. One sees evidence of this variety throughout his journal. DeForrest’s personal stamps may be lost to history (though maybe not!), but the library’s Nicholson Whaling Collection contains dozens of authentic stamps that match his description, in addition to hundreds of authentic logs and journals. 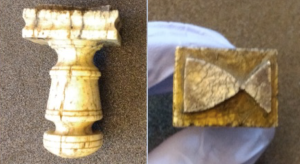 For example, this ivory stamp is in the form of a whale’s tail, or fluke. DeForrest used a similar stamp when the crew attacked but failed to catch a whale. The grooved and detailed handle shows that whoever crafted this artifact had some skill. The ink-soaked head also shows that the stamp got some good use. Artic bowhead whales may live to be over 200 years old, so some of the lucky escaped animals represented by this stamp could still be alive today!

In an equally poetic and dark twist, the bones of a captured whale could be refashioned as a stamp used to represent the death of another whale! The whales that DeForrest captured could also have been be noted using a wooden stamp much like the one above. This artifact lacks the detailed handle of the ivory example, but the careful carving of the whale’s features is impressive nonetheless. The portrayal of a smiling whale is certainly the result of artistic liberty, as sailors like DeForrest knew them to be ferocious creatures who could just as easily kill as be killed. As Herman Melville affirms in Moby Dick (1851), “A dead whale or a stove boat!” Or, one could say, “a stamped whale or a stove boat!” 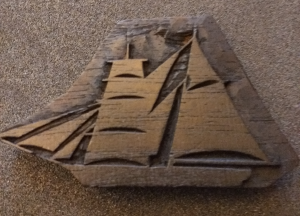 A whaling ship’s thirty or so sailors relied on one another to stay afloat, but also welcomed the opportunity to see new faces. Ships that met at sea exchanged letters, news, or books. According to DeForrest, “The usual practice among whale ships is when they speak each other, to have a Gamm as it is called__I.E. visit each other.” DeForrest always mentioned the ships he had a “gamm” with, and often marked the event with a stamp much the one above. If whale stamps represented a time of hard labor, a ship’s stamp could mark a time of relative leisure. “Many of these Gamms end in a drunken spree,” DeForrest quips, “_ and many do not.”

If you have the chance, stop by the Special Collections Department for a “gamm” and hold whaling history in your hands!

On Monday evening we celebrated student type design with four talented finalists for our Updike Prize for Student Type Design. Here they are (with typeface names in italics):

If you didn’t get a chance to attend the event on Monday you can still see examples of the students’ work on display in our third floor exhibition area.

And if you’re an aspiring student type designer, it’s never too soon to start working on your entry for the 2017 prize. Contact us or stop in to ask about the contest.

Thanks to our sponsors, Paperworks, for making the prize possible. And thanks as well to Fiona Ross, this year’s guest speaker, who enlightened our audience on the topic of non-Latin type design.

Like Loading...
I’m excited to announce that our speaker for the next Updike Award Ceremony will be Fiona Ross. Dr. Ross will be visiting us from the University of Reading, and she’ll be discussing her work on non-Latin alphabets.

Fiona Ross is a pioneer in the field, beginning with over a decade at the helm of Linotype’s non-Latin font division. She recently received the Society of Typographic Aficionados’ Typography Award, among other honors.Dr. Ross’s lecture will take place as part of the ceremony to celebrate the finalists of our Updike Prize for Student Typography. The event, which will be accompanied by an exhibition of materials from our Updike Collection, begins at 5:30 PM on Monday, October 17th at the Providence Public Library.The event is free, but we request that anyone interested in attending RSVP at:

(Thanks to our fantastic sponsors, Paperworks!)

This is a long overdue post about a terrific gift we received in early January.

Big thanks to Akira Yoshino and Taro Yumiba (and others) who sent in a cache of great 20th-century Japanese type specimen books and ephemera. If you’re interested in taking a look, stop in during our open hours, or set up an appointment to visit.

We’re hard at work on our spring exhibition and event series, “Portals: The History of the Future,” and in the process we’ve been coming across books, movies, and other stuff that gets us in the Portals spirit. So we decided to share some suggested reading (and listening, and watching…) here. We’re also going to post this (and update it) on the Portals website, which should be live soon.

This is just a quick note to help you plan your calendar for the upcoming year, especially if you’re someone who plans way ahead. We just crowned our first Updike Prize winner this past February (congrats, Sandra!), and it was a great event, with a terrific lecture by Tobias Frere-Jones. But one thing we learned in the process is that February in New England is a month best left to hunkering down with warm beverages and hoping for spring.

That’s why we’re moving the Updike celebration to October from now on. Not this October, though: October 2016 will be our next date. That also means that students working on their typefaces have a bit of extra time to do their work. The new deadline is now September 16th.

And there’s one more change: We’re now doubling the size of first prize to $500! So get to work and plan your visits to use the collection. (As a reminder, we have open hours, no appointment needed, on Tuesdays from 10-1pm and Wednesdays from 3-7pm.)

And now, for no particular reason, here’s a picture of some folks from an 1886 German type specimen book: