The book’s illustrator, F. G. Attwood, created the below likeness of some school boys, including the eponymous Jack Hall, who are obviously, blatantly up to no good: 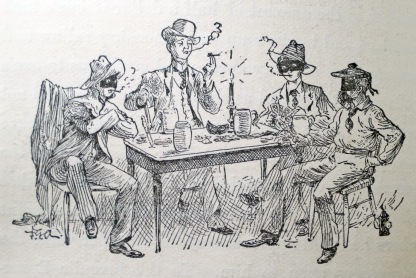 Cigarettes! A variety of casual yet dashing hats! Big mugs! Knives stuck in the table!

These masked marauders are members of “Big Four”, a secret society of fourth-class boys who expressed their “vitality” through hijinks such as “the pilfering of neighborhood hen-roosts, the sealing up of the lock of the schoolroom door, [and] the firing of a tar-barrel in front of the Doctor’s very window”. A later illustration also shows them executing a daring, late-night escape involving a basket and a rope. Dreadful!