If you’re perchance flipping through issues of The Sphinx (the “Official Organ of the Society of American Magicians”) from 1911 and 1912, you may notice the excellent advertisement pages in the back. 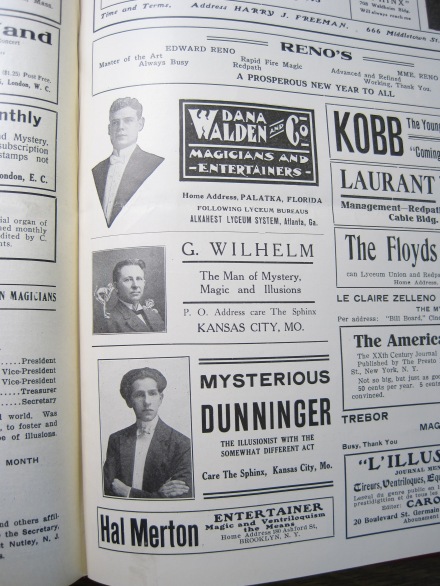 This particular page of advertisements shows magicians’ personal advertisements, of sorts, featuring Dana Walden and Company, G. Wilhelm, “The Man of Mystery, Magic and Illusion”, and Mysterious Dunninger, “The Illusionist with the Somewhat Different Act”.

Here’s a slightly grainy close-up of G. Wilhelm and his ancillary tiny demons:

If you’re like me, you’re wondering what qualifies Mysterious Dunninger’s act as “somewhat different”. I can’t exactly answer that question, but I can tell you that Mysterious Dunninger was the early stage name of one of America’s greatest mentalists, Joseph Dunninger.

-as a child, he met Buffalo Bill Cody
-beginning in 1913, he performed regularly at Manhattan’s Eden Musee wax museum
-he collected books, and supposedly had over 30,000 volumes
-he was friends with Houdini, and together they worked to debunk fake spiritual mediums
-he was the first person to offer live mind reading on the radio

Wikipedia has a list of books and articles penned by this famous mentalist, and his daughter wrote a biography called “Daddy Was a Mind Reader“.