Many of the volumes in our Edith Wetmore Collection of Children’s Books contain descriptions of the frightening things that can befall children who choose to travel great distances alone: being kidnapped, having to become chimney sweeps, getting lost in dense forests once the sun sets, being conscripted as sailors. It’s a scary world out there.

Today we explore the lessons in Little Truths Better Than Great Fables, a teeny-tiny book published in 1800. Most of the book is in a question and answer format (“What are acorns?” “The seeds of the oak; and one acorn brings a young tree, which, in a number of years, is cut down and squared for use.”), with explanations of the natural world, customs of rural American life, and gentle admonishments not to eat unripe fruit or strike at bees.

The frontispiece of the book belies its soft tone, for one flips open the paper cover to reveal this alarming scene: 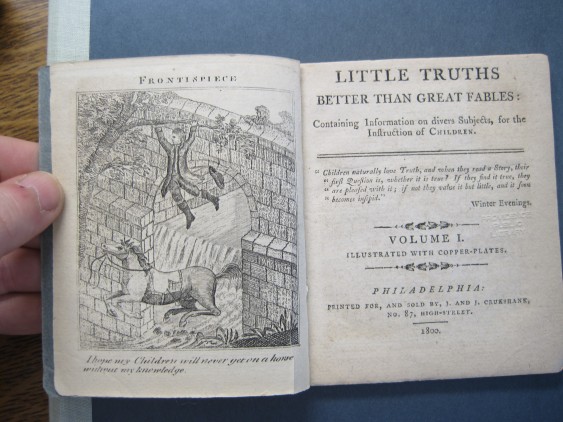 What, pray tell, is happening to this poor fellow? 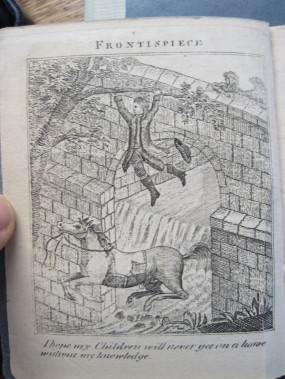 As the caption kind of (not really) explains, he presumably got on a horse without a parent’s knowledge, leading to the horse springing, carousel-style, over a raging waterfall, while said bad child was flung many feet into the air, and consequently left dangling precariously over an aqueduct. Terrible!

I had to examine the text carefully before I found this: 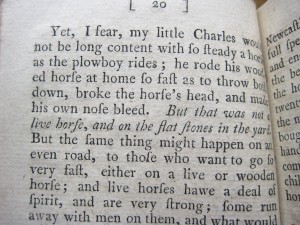 Yet, I fear, my little Charles would not be long content with so steady a horse as the plowboy rides; he rode his wooded horse at home so fast as to throw both down, broke the horse’s head, and made his own nose bleed.

When Charles insists that he would hold on tight, even when astride a spirited horse, his parent reminds him of the story of Lambert’s Leap, wherein:

Cuthbert Lambert, of Newcastle upon Tyne, who was riding full speed over Sandiford stone bridge, and endeavoring to turn his horse round, the beast leaped over the battlements; the horse was killed by the fall, being twenty feet to the bed of the water, but the man was providentially caught in the boughs of an ash, where he hung by his hands, til relieved by some passengers coming that way. I hope, therefore, my children will be careful never to get on a horse without my knowledge.

Ooooh, okay. The engraving shows an irresponsible adult of history, and the caption is a warning for would-be careless child equestrians.

Unfamiliar with Cuthbert Lambert’s story, I dug about on the internet until I found a page from John Sykes’ impressively-titled Local records; or, Historical register of remarkable events which have occurred in Northumberland and Durham, Newcastle-upon-Tyne, and Berwick-upon-Tweed, with biographical notices of deceased persons of talent, eccentricity, and longevity. Sykes’ meticulous register notes that Lambert’s ill-fated leap took place on September 20th, 1759, although, according to Sykes, Lambert actually remained seated on the horse during the entire descent, and an ash branch broke their fall. (The popular misconception that Lambert was stuck in a tree came from a Mr. Pollard’s 1786 print of the affair.)

Sykes also describes how, upon landing, Lambert’s mare “stretched itself out and died almost immediately; being a great favourite, its skin was preserved in the family.”

Um. Therefore, don’t ride a horse without permission. Got it?