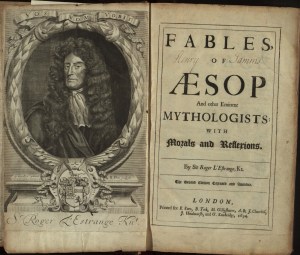 Roger L’Estrange (1616-1704) of London was one of the earliest English journalists and pamphleteers, and an ardent supporter of the Royalist cause during the English Civil Wars (1642–51) and Commonwealth period (1649–60). L’Estrange was strongly implicated in an unsuccessful attempt to recapture the town of Lynn, Norfolk, from anti-Royalist forces in 1644, and he was imprisoned for four years. He later withdrew to the Netherlands. Just before the restoration of the monarchy he attacked the poet John Milton, a leading apologist for the Commonwealth, in a pamphlet called No Blinde Guides (1660), a reference to Milton’s blindness. The Revolution of 1688, in which King James II lost the throne, cost L’Estrange his official post of surveyor of the imprimery (printing office). He afterward supported his wife and himself chiefly by translations of many standard authors, including the lively Fables of Aesop, and Other Eminent Mythologists: With Morals and Reflexions (1692).

Shown here is his second edition of Aesop (1694), “corrected and amended,” lacking the 2nd part, as usual, which the Library bought from Leona Rostenberg in 1965 for $50. Aesop was first translated into English by William Caxton in 1484; nearly all subsequent fables are based upon them (through Greece they influenced most of the western world).