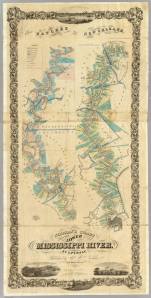 Norman’s Chart of the Lower Mississippi (1858)

Found this huge (62 x 31 inches) cadastral map all folded up in its original boards on the shelf. It just kept unfolding and I kept cursing, becuase I knew I was not going to allow myself to fold it back up! Now I don’t have a place to store it, but it is such a beauty, so I am putting it on display.

Marie Adrien Persac (1823–1873) was a photographer, architect, artist, and civil engineer. Born in Lyons, France, he apparently came to the United States to hunt buffalo and settled in Indiana to cultivate apple orchards. He married Marie Odile Daigre (of East Baton Rouge) in December 1851, and by 1857 they had three sons and were living in New Orleans.

The map is commonly known after the name of the publisher, Benjamin Moore Norman, who announced in 1857 his plans to publish (in three parts) a chart of the Mississippi from New Orleans to Memphis. This first section, from New Orleans to Natchez, Mississippi, was engraved and printed by J. H, Coulton in New York City, and was the only one published.

According to the New Orleans Daily Crescent of April 2, 1858, the map “is a perfect picture of the windings of the Father of Waters from this city to Natchez, with every plantation on its banks, drawn and colored, with the name of the owner and whatever name he may have given his plantation . . . Mr. A. Persac, who descended the river in a skiff, landing at every mile, and drawing every plantation line and taking down every name and landmark on both banks of the river, deserves the highest credit for his very able and useful labor.”

Contrary to what one might expect, the highest, and therefore best, arable land in the lower Mississippi was closest to the river on natural levees that gradually slope away and down to the back swamps (the result of flooding, as the heaviest deposits of silt are near the banks). Plantation houses faced the water, the properties were long and narrow, and the principal crops were sugar cane and cotton. The view of New Orleans is from the lower French Quarter looking upriver from the dock of the Third Street Market toward Jackson Square. 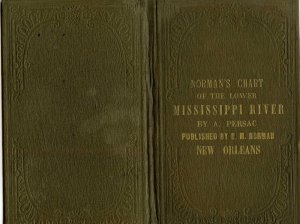 The map itself is quite scarce—fewer than 10 copies are known, and most of them lack the original boards in which the map was issued (shown here). According to map dealer George Ritzlin, it is “normally in poor condition because most copies were used by river pilots to locate plantation landings.” There are four views in all: “New Orleans” (mentioned above), “Baton Rouge,” “Sugar Plantation,” and “Cotton Plantation.”

[Image is of the copy in David Rumsey’s collection (http://www.davidrumsey.com/). Cf., Rumsey’s description and an article on Persac by Barbara Sorelle Bacot in the November 1991 issue of Antiques Magazine (pp. 806-815).]