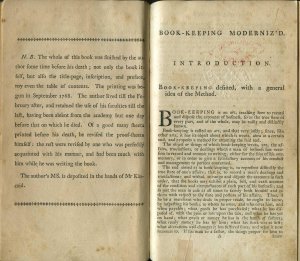 Historians know that there has been a “global economy” for centuries, although that fact often escapes the mass culture. Yesterday I came across this accounting textbook which was a standard in its time (ca. 1760-1800), initially published by its author, John Mair (1702-1769) as Book-keeping methodiz’d and later Book-keeping moderniz’d (this is likely the 1773 edition, but lacks the title-page).

If you are doing research that includes examining colonial business records, which can reveal a great deal about people and society, this is a sort of road map to those documents. The student or amateur researcher opening a box of colonial-era financial records will be faced with so much meaningless paper, unless s/he knows what they are and why they were generated by the business. Mair defines the various documents produced in the course of business (day-book, waste-book, cash-book, invoice-book, sales-book, ledgers, journals, books of commissions, wares, consignments, etc.), specimens of bills of exchange, promissory notes, and legal forms (charter party, bonds, letter of attorney, bills of lading, insurance policies, affidavits, etc.). 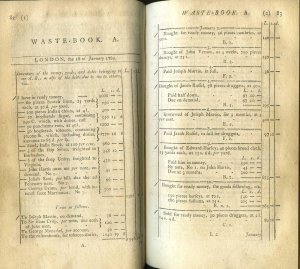 In terms of American history, Mair’s book is interesting because he has chapters devoted to “the produce and commerce of the sugar colonies” and “the produce and commerce of the tobacco colonies,” wherein he explains wharf and plantation accounts, as well as accounts kept by storekeepers in Virginia and Maryland. There is also a 13-page “merchant’s dictionary” at the end, explaining commonly used terms.
According to McCusker & Menard’s seminal text on the subject (The Economy of British America), book-keeping manuals such as Mair’s were very popular and literally used to pieces by businessmen in North America. An excellent example of a locally held copy owned by a colonial merchant is at the Rhode Island Historical Society, and is Obadiah Brown’s copy of Charles Snell, A Guide to Book-keepers (London, 1709). Here is their record of it:
http://isis.minisisinc.com/scripts/minisa.dll/4/1/1/9065?RECORD&UNION=Y
For the bibliophile, I can tell several things about Mair’s book that no digitized copy would yield, by the way. It was bound in January 1911 by F. J. B. & Co. (this from a binder’s stamp on the rear free end paper). The former call number embossed on the binding is “7079.1”, which is the old classification devised by our first librarian, William E. Foster (who served 1877-1930). Foster developed it just as Dewey was developing his system in the 1870s. This number allows me to know that this book has been in the Library for over a century–it appears in our printed catalogue of 1892. The accession number (in red ink, written on the verso of the first extant page) is 3696, and according to our first accession book, came from the Providence Association of Mechanics and Manufacturers (chartered 1789), one of the charter groups which formed the PPL.