>The following review of Margaret Bingham Stillwell’s book about growing up on Benefit Street ran in “Notes for Bibliophiles” as “The Story of an Old Street” on December 9, 1945. Stillwell was a scholar-librarian in Providence from 1909-1953, at the John Carter Brown Library and the Annmary Brown Memorial. Her autobiography, Librarians are Human, is a must-read for anyone interested in library history.

The timeworn adage that a shoemaker should stick to his last is shown to possess limited application by the recent publication of a prominent librarian. Miss Margaret Bingham Stillwell, familiar to bookmen as the author of “Incunabula and Americana” (1931) and “Incunabula in American Libraries. A Second Census” (1940), both standard works of instruction and reference, has laid aside for the moment her bibliographical last to write and illustrate a book about a single street in her native Providence. “The Pageant of Benefit Street Down Through the Years” (the Akerman-Standard Press, Providence, 1945, 144 pages, $4) is a gracefully written contribution to the growing lore of American cities, and particularly to the history and lore of the old city which it concerns. 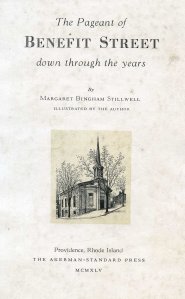 In the beginning, when Roger Williams and his earliest associates were dwelling upon their narrow “plantations,” running from the river bank up over the hill to the plateau beyond, Benefit Street was a path along the ledge which, halfway up the hill, ran parallel to the waterfront. Cutting through the orchards and gardens of the home lots, it made its way from the head of the bay to the far north end of the long town. In 1756 the path was widened into a road constructed for the “common benefit” of all, and ever since that day Benefit Street has been a chief north and south highway of town and city, and, for the greater part of the two succeeding centuries, the center of the older residential section of the community. Miss Stillwell’s account of the old street is made up of childhood memories, of reminiscences of her elders who have lived on the street or close to it throughout its history, and of stories carefully garnered from family friends or from obscure printed sources. She has related its past to its life today, when it is no longer the fashionable center of the town, but still an active, important street, boasting a beautiful curve almost throughout its length, and as large a number of interesting old houses, perhaps, as any other street in America of the same length.
Miss Stillwell’s reconstruction of the street’s history is a personal one, or perhaps not quite that. Her voice in describing the street becomes the voice of Providence itself recalling the past. Most of her anecdotes, her descriptions of persons and places are distinctly matter for the Providence family alone, gaining body and effectiveness only through the familiarity of the reader with the local scene. But no reader of sensibility, however slight may be his Providence sympathies, can fail to perceive that through local anecdote and through recollections of local personages, events and places, she has built up an informal record and documentation for the book of American social history.

Bookmen will read certain sections of Miss Stillwell’s volume with genuine interest, for Benefit Street has long been a respectable center of American collecting and library making, and, in a restricted sense, of American literary history. Near its southern end is the Nightingale Brown house in which John Carter Brown and his son John Nicholas brought together the collection of Americana which today is widely known as the John Carter Brown Library. Proceeding northward one comes at once upon the John Brown house, now the home of the distinguished collections of the Rhode Island Historical Society, where formerly for many years were enshrined the notable Shakespeare collection and Kelmscott Press books of the late Marsden Perry. Beyond that is the little building put up by Colonel George Shepley to house his collection of Rhode Island books, prints, and manuscripts. A short block beyond is the house in which, presumably, Stephen Hopkins wrote “A true Representation of the Plan formed at Albany,” 1755, and “The Rights of Colonies Examined,” 1765. Diagonally across from the Hopkins house is the Providence Athenaeum with its uninterrupted history leading back to the Providence Library Company of 1753, one of the two or three oldest libraries of any sort in the United States. In the block beyond is the former home of John Russell Bartlett, bibliographer, philologist, and author of “Dictionary of Americanisms,” “Personal Narrative of Explorations in Texas, New Mexico, etc.,” and editor of the John Carter Brown catalogue of 1875-1882. Across the street from Mr. Bartlett’s house is the Museum of the Rhode Island School of Design. A few hundred yards farther on is the house where Mrs. Sarah Helen Whitman was living at the time of her tempestuous engagement to Edgar Allan Poe, and just beyond that the boyhood home of Daniel Berkeley Updike, unsurpassed American printer, who made literature of what could have been workaday writings on the history of his craft. The list could be expanded, but enough instances have been cited to show that Benefit Street is something more than a busy highway through a modern city. 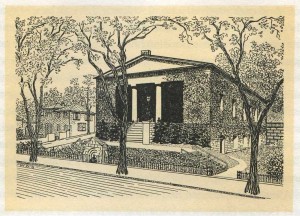 The sixteen pen drawings of houses and vistas with which Miss Stillwell has illustrated her little book are exquisite, an expression of a clear vision and a sure hand every line drawn accurately observed and literally transferred to paper. The end papers are maps constructed by Miss Stillwell with legends and dates which form an outline history of the growth and development of Providence. Typography, copper etchings, paper, binding and presswork are distinctly a credit to the printers and publishers, the Akerman-Standard Press of Providence.