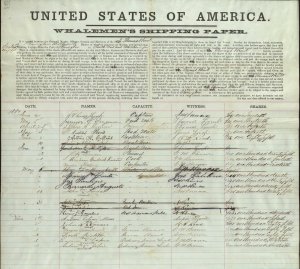 Maritime voyages often evoke romantic images (either grandiose or tragic), but what most people forget is that they were always business ventures. As such, they generated an awful lot of paperwork, from fitting out the ship to the financial disbursements after she came home (these could take decades or longer). If some happening on the voyage generated a lawsuit, or if the ship was seized lawfully (by a privateer) well, the paperwork became quite heavy. Shown here is an example of a crew list, done for the whaler Thomas Hunt on a voyage in 1880.

One of the best guides I have found for identifying the standard paperwork generated by a voyage is Douglas Stein’s American Maritime Documents, 1776-1860, available in print and online at http://library.mysticseaport.org/initiative/ImText.cfm?BibID=6405&ChapterId=1
Stein’s definition of a crew list is as follows:
A printed document, varying in size and format. Contains the names and descriptions of every member of a ship’s company. Across the top was printed “A List of the Company,”, “List of Persons,” or perhaps “Role d’Equipage,” the French term. The master’s name, ship’s name, destination, and tonnage was often found on the upper portion of the document, where some examples displayed engraved eagles, etc. The body of the Crew List consisted of columns containing names, ages, places of birth and residence, and other descriptive information, such as complexion and crew status. The kinds of information requested varied from one document to another. Some examples also include a column for witnesses signatures. Depending upon the immediate use of the document, it could contain the signatures of the shipmaster, the customs collector, and consular official, or a combination thereof. Some examples were certified not only with authorized signatures, but by various stamps and seals as well.
In the PPL we have several dozen crew lists, and other maritime collections have them as well. Most of the extant crew lists related to American whaling are in New Bedford, MA. In fact, you can search crew members by name here:
http://www.newbedford-ma.gov/Library/Whaling/Whaling.html
This database is a comprehensive index of men and ships on whaling voyages from the New Bedford Customs District from 1807 through 1925. Fabulous.