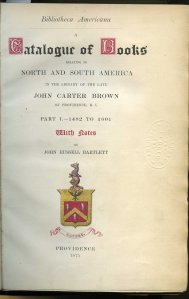 Lawrence Wroth, Librarian of the John Carter Brown Library from 1923 to 1957, commented that “there is no virtue in age of itself, but continuity and steadily maintained purpose are excellent things in the formation of book collections. Inevitably libraries possessing these attributes are made up of books which newer institutions must seek in vain.” Libraries in Rhode Island share a steadily maintained purpose, even if that purpose differs in its particulars.

John Russell Bartlett met John Carter Brown around 1845, when the former was a bookseller in New York, and a relationship was established as dealer and collector. After his tenure in the Southwest as the Mexican Boundary Commissioner, Bartlett returned to Providence, the place of his birth, in 1853. John Carter Brown had mentioned in 1849 that he would “be glad to have your advice and suggestions regarding some part of my library,” and Bartlett began working with Brown in earnest to pursue books related to the “Great Subject” (Brown’s term for the expansion of Europe into the Americas).
The item displayed here is the second printed catalogue of the JCB Library (the first was published in 1865). The publication of both catalogues helped to legitimate the field of Americana collecting, and consequently drove prices for these items up (unfortunately for Brown). They also informed the public of the scope of the collection, thereby increasing the demand for answers to reference and research questions. The second catalogue also provided a bibliographical training ground for the sons of John Carter Brown (John Nicholas and Harold), who spent much of their time with proof sheets of the latter volumes, sending corrections and suggestions to Bartlett.
Visit the JCB at www.jcbl.org