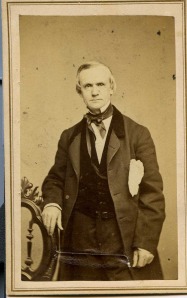 John Russell Bartlett (1805-1886) was born in Providence, but his family moved to Canada during the War of 1812. He “left the farm” and returned to Providence in 1824, working in his uncle’s shop downtown (the Arcade was built while he worked for his uncle–he saw every column raised). Later Bartlett worked for Cyrus Butler (founder of Butler Hospital) in the latter’s Bank of North America, and became a founding member of the Povidence Athenaeum. He moved to New York in the 1830s and eventually opened a bookshop (Bartlett & Welford) with a British bookman who had supply lines abroad (so to speak). The place was patronized by luminaries like Edgar Allen Poe, James Fenimore Cooper, and Washington Irving. In the 1840s he co-founded the American Ethnological Society with the renowned Albert Gallatin (Treasury Secretary under Jefferson and Madison). Bartlett was appointed Commissioner to establish the boundary with Mexico in 1850, and after a three-year stint in the southwest, returned to Providence. He became our longest-running Secretary of State (1855-1872), published an amazing set of colonial records, and generally made great contributions to Rhode Island history.